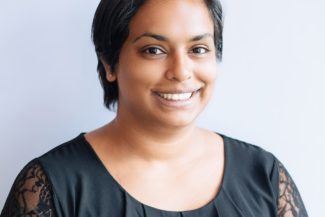 Fay Sharpe, founder of Fast Forward 15 introduces Priya Narain in her series on Shero’s: “I first met Priya when she applied to be a mentee on the FF15 programme quite a few years back now! She was selected by Caroline Jackson who was then a Senior Principle Academic at Bournemouth Uni. Instantly Priya and Caroline made much common ground including a fear of heights which they quickly remedied with a challenge. Always one to put herself forward to volunteer or help, Priya is an unsung hero. She may not be the loudest but there’s a quiet confidence there and honesty that means she would always try her best to help out wherever and whenever asked. She edits our newsletter and supports FF15 all round.. “

Who is Priya Narain?

“I started my career journey working in the travel industry, this was the role I ‘fell into’ after finishing university. As someone who was eager to learn more, I always put my hand up to assist when planning in-store activities, managers meetings (including a managers day trip to Brussels that I was not allowed to attend!), regional and branch socials etc., as this always gave me some variety to my role which I really enjoyed. I even had the opportunity to work at the London Olympics, which was just fantastic, as the company I worked for had organised hospitality packages. I always felt that I would remain in travel for a long time, not just because of the travel benefits but also because of the great teams I worked with.

Then after a career spanning almost ten years, I was dealt a blow that my role was being made redundant as part of a cost-cutting exercise along with over 2000 of my colleagues nationally. I almost took another job in the same field but instead I took the time to really dissect my role and work out the bits that I enjoyed the most, which I discovered was events.

I then started to look at ways to pursue this as my next career move and I found an event management diploma with The Event Academy. I signed up to the course and undertook various volunteering opportunities with different charities and organisations. As part of the diploma we had to work in groups to deliver on a live brief, and it is fair to say this was my first real experience of presenting to real clients, and I loved it.

After completing my diploma, I was eager to get started in the events industry. I found an internship with a nightclub venue who used the space to also host corporate parties. At first I was apprehensive as I was already in my 30’s and thought that I would be too old to work as an intern and even started to question if I had made the right decision to retrain for a new career. However, it is because of this experience why I am now a firm believer that you are never too old to make new goals.

Coming into the industry at a later stage in my life the other industry newcomers I was meeting were all relatively young and fresh out of university who had built up this bank of knowledge form having studied an event management degree. And then there was me, this 30 something newbie who did not have a clue about what she was doing, the imposter syndrome was real! And I think this is why I spent a lot of time early in my career networking. I networked so hard because I wanted to meet everyone, learn more about an industry that I had no real prior knowledge of, and most importantly I wanted people to get to know me too.

An important lesson I learnt is to not measure or compare your level of success against anyone else’s. Not only is this a waste of your precious time and energy, but everyone is on their own path and you may be heading in different directions, so in the end the comparison becomes completely irrelevant and pointless. Use this time instead to concentrate on yourself and your own goals. Take some time to think about what you enjoy doing and how you can then transfer that to a potential new role. And, most importantly start networking; this can be done online or face-to-face, but you should definitely be engaging with people who have similar goals to you.

A few years ago I got talking with two new contacts, Elena and Caitlin, about our own individual journey into the industry and discovered that we shared similar views on how there wasn’t enough assistance when taking your first steps into the industry whether that was through academia or a career change like myself. To bridge this gap, we created and co-founded Event First Steps where our aim is to encourage newcomers to forge their own career paths. We care about, and have held panel discussions on, routes to industry, visibility of the entire industry and diversity.

I am now in a position where I know what I like and don’t like which provides me with an opportunity to identify areas for development. I have always been passionate about learning new things etc. Having been a previous mentee of the Fast Forward 15 programme I can see the value that it brings, and as a diversity ambassador for the programme I recognise the importance of having visible role models, and so because of both these elements I am returning as a mentor for this year’s cohort.”