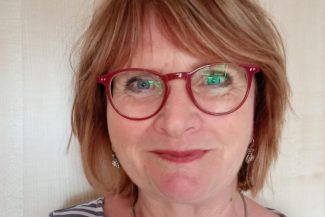 Fay Sharpe, founder of Fast Forward 15 introduces Marian van der Hoeven in her series of Shero’s: “It’s been my pleasure to work with the lovely Marian for the last 5 years. When she was at BCD she was always cheery, willing and someone you would want to have on your team. It was no surprise that when she left she volunteered to help me with FF15 as our Volunteer programme manager. She surprises me every day, learning new things (building websites), making the most wonderful paintings, creating our yearbook, creating the best presentations . In short it’s like working with your best friend -nothing is too much trouble- and she’s one of the unsung heroes or should I say Shero’s. I don’t think she will ever realise how much she has helped me and how much I appreciate her.”

Who is Marian van der Hoeven?

After secondary school, at the age of 18, I decided not to go to University. I didn’t want to study fulltime. Instead, I wanted to work and earn money. Guess what? Half a year later, I began to study, in the evenings and the weekends and I continued doing this for many years (a.o. Marketing, Public Relations). Moreover, learning new things became a way of life. I’m still curious and I still love to learn whether it’s for work or in private life.

My first job was at PTT Telecom, the Dutch equivalent of British Telecom. I was working at the training department and here I really learned to work. A valuable lesson that I took with me for the rest of my live.

Once I completed my Marketing courses, I got the opportunity to change jobs within PTT. It was an interesting time. I started my job at PTT Telecom at the time where non-electric typewriters were the standard. Computers, Data Communication and the World Wide Web were not in scope at that time. That changed when PTT Telecom, together with the Swedish and Swiss Telecom-companies decided to set up Unisource in order to develop and grow International Data Communication. It was a big change, in many ways and I loved it. Not only were we, at Unisource, working on something completely new in a technical way, we were also developing a company culture that would fit this new market. As I was involved in this process as an Internal Communications Consultant, it was one big learning curve.

At the moment all necessary and relevant changes were completed, and Unisource was ready to bring the International Data Communication to market, the decision was made to bring it back to the “mother” companies, so in Holland to KPN (the new name of PTT Telecom).

It was at that time that I decided it was a good moment to move on, so in 2001 I changed to what today is BCD Travel, a business travel company. I started as a communications consultant and over the years became responsible for the Business Travel Academy. See the thread in my life? Learn, develop..

In 2017 I moved to BCD Meetings & Events. At that time I was responsible for the Dutch team. Very interesting, and working 50-60 hours a week never was a problem. Until I was confronted with some pretty heavy storms in my private life which rang a bell. Was it worth to invest so much of my valuable private time while there were such important in my private life that needed my attention? The answer was clear. Luckily I got the opportunity to make a step back and so I ended in the team of Fay where I became responsible for Internal Comms, Internal Events. Although I already knew about Fast Forward 15 since 2017, it was at that time that I got the opportunity to take a closer look. I was impressed by how passionate Fay was (and is) to run this programme and help 15 women each year to develop and grow. So when Fay’s assistant went on maternity leave, and Fay asked me to help her with coordinating the programme, I was absolutely happy to do so.

And then..2020, the year of the start of the pandemic. Fay and my UK colleagues left BCD M&E, I kind of stayed behind alone and with hardly any jobs to do. Luckily BCD allowed me to continue to help Fay with Fast Forward 15 and actually, working with Fay on the programme became a lifeline for me. The other thing that kept me going at that time was my curiosity, and the will to learn new things. I decided to make a book for my brother’s birthday in January with photos and the most amazing family stories. I learned so much about my family’s history, I learned how to lay out such a book and it turned out to be a “family best-seller”.

Knowing the harsh situation at BCD Travel and BCD M&E during the pandemic, I wasn’t surprised that early 2021 BCD had to dismiss quite a lot staff and that  I was one of them. For the first time in 41 years I became unemployed. Initially, this situation worried me. With 59 years on the counter, I wasn’t so sure that I would ever find a new job. I was wrong.

Initially I took some time to reflect on what I would like to do in the future, and what not. Once I figured that out for myself, in one week, 3 potential employers somehow contacted me. As I had decided to stack things that feel good and that I like doing, it was not too difficult to choose.

And that’s why I now work for Public Support, a company that is doing secondments in the public domain. “Working from your hart with key values as social, ambitious, authentic and pride” is what they stand for, and up until now, in every possible way they prove this mission and these values to be truly in everything they do. I love that and I can only hope that I will be doing a lot of interesting jobs for the public domain via Public Support. And meanwhile, I continue to learn, and will grow, into the width this time.”