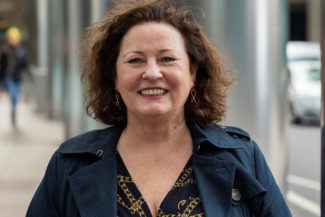 Fay Sharpe: “I met the dynamic Liz Agostini about 6 years ago and more recently have been working with her on some Confex panel sessions and our Charity event. One thing that strikes me about Liz is she’s always smiling. Considering she’s a media mogul and owns/ runs one of the industry’s longest standing and successful exhibitions she always has time for people and I would imagine whilst she’s straight talking, she would always be there for her team whatever and whenever. This year she’s really helped the FF15 mentees with our charity event, something I am extremely grateful for and it’s a pleasure to work with her.”

Who is Liz Agostini?

“I am Liz Agostini, one of the Directors and Owners of Mash Media Group and Group Portfolio Director of International Confex, Conference News and The PA Show. I started life selling advertising space in an IT trade magazine, deviated via recruitment for 17 years, latterly running my own recruitment business and fell back into the familiar arms of publishing and media in 2011 when my husband and MD of Mash, Julian Agostini issued the call up to come and run Exhibition News. 11 years on and I haven’t looked back. My publisher journey took me via nearly all the Mash titles with stints on the internationals, Conference & Meetings World and Exhibition World and then coming to rest on Conference News – my favourite, (though like kids, I really shouldn’t have favourites!)

In 2014, I stuck my hand up to run International Confex which we were thrilled to have acquired from UBM in late 2013 – really, how difficult could it be?? The videos and photos taken of me during and post show answer that question in full! I look like somebody who’s just got off the world’s largest rollercoaster – shell-shocked, wobbly-legged and wide-eyed with a ‘what the hell just happened?’ look about me. When it came to running events I didn’t know what I didn’t know and the number of overlooked elements that ambushed me over the 2 days rose into triple figures!

What was clear was that I’d lacked a mentor of any kind, somebody to point out the missing pieces that would trip me up onsite. The show received great acclaim but behind the scenes I felt that I’d got away with it and as a self-proclaimed control freak, the lack of control was unbearable.

I like to think that I do a much better job these days but so much of this is down to the phenomenal talent that we have in the business. I genuinely believe that (as long as you have a strong product) business success begins and ends with your people. As a recruiter, I rarely ticked all the boxes on the job description the client had given me but I had an uncanny feel for the candidate who would just ‘fit’, despite any gaps in skills and experience. The same applies when we’re recruiting for Mash – attitude, energy, ambition and values first, the rest can be taught. According to the desk calendar mantra that has stuck with me – ‘First rate people recruit first rate people and second rate people recruit third rate people’ and we encourage all our management team to recruit people who are better than them, or can be in the future when their talent has been nurtured.

Which brings me round to Fay Sharpe and the Fast Forward 15. I first encountered Fay in person in 2015 at the event industry sleepover Mash had organised with Olympia. Fay spoke about her business journey with blistering honesty, the highs and the lows and the bits that had kept her awake at night. As a business owner, so much of her story resonated and has stuck with me that I guess Fay has become something of a de facto mentor for me, without even knowing it!

The FF15 mentoring scheme is important, not just because it inspires, encourages and empowers the next generation of women in the events industry but also because, if we nurture this talent now and teach them all we know, the next generation can be even better than us and ultimately define the future success of our businesses.

We’re so proud to be supporting Fast Forward 15 with The Bingo Ball which is taking place at International Confex on the evening of day 1, 8th March. Buy your tickets here.”