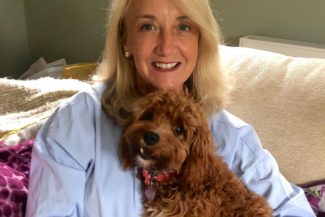 Fay Sharpe (founder of Fast Forward 15) introduces Leigh Jagger in the fifth of her series on Shero’s: “I’ve Known Leigh for over 20 years. In the events industry, like me apart from being a career mum too, she’s been there, seen it, done it!!  One of the things about Leigh that I love is she’s a very humble person, quietly confident. She’s someone people turn to for advice, someone you would trust. Now supporting the industry through her work at Evcom and someone with immense talent and leadership.

Who is Leigh Jagger?

Like many of my generation, I fell into the events industry by accident rather than following some master plan…  After Uni, I planned to take a year out, save some money and go back-packing.  The first role I took however, was organising training courses in South East Asia. I spent 6 weeks at a time travelling the world in 5-star hotels and getting paid for it – unsurprisingly I was hooked.  Needless to say, the backpacking never happened and I started my journey into the world of events!  You don’t always have to stick to your plan – often `plot twists’ can lead you to new exciting places.

I moved to London and joined the commercial conference world, where after a few years, I became Managing Director at 28 years old.  Thrown in at the deep end with a very steep learning curve – if I am honest there was certainly a lot of `fake it until you make it’ going on but I emerged relatively unscathed. When exciting opportunities present themselves, you just must take a deep breath and go for it!

I joined Banks Sadler as Managing Director in 2000 and became CEO in 2007.  I must admit that I had never heard of Banks Sadler when they approached me – it was a bit of a gamble, but it just felt right!   I only ever thought I’d stay 4/5 years and get some experience agency side …  I ended up staying 18 years in total!

18 years might sound like a very long time with one company, but Banks evolved so much during that time that it was more like having 5 or 6 different roles.  We went from 30 people in one little office in Camden to nearly 300 people across 7 offices in Europe, North America and China.  I feel very privileged to have worked with so many of the world’s leading corporates on their increasingly sophisticated meeting strategies over the years and of course producing some amazing events.   I also got to work with some of the most talented individuals in our industry and I feel very lucky to still count many of them as good friends.   I definitely look back at my years at Banks Sadler with huge fondness and am hugely proud of what we achieved.

In 2017, Banks Sadler was acquired by AMEX GBT and we became part of one of the biggest meeting and events providers globally.  I joined the AMEX global M&E senior leadership team, took on responsibility for the AMEX M&E UK team as well as the integration into the wider AMEX world.  It was a fascinating time for me and a great opportunity to experience life in a larger corporate versus a bespoke creative agency – I learned so much from working in such a different environment.  In 2018 however,  I decided the time was right for me move on to pastures new– a huge decision after so long but the time just felt right and I firmly believe you have to trust your gut instinct.

With a big birthday looming and teenage kids in exam years, my objective was to find a better work/life balance. So, I now manage a portfolio of non-executive director/advisor roles, mentor several young leaders in our sector, and, until recently, was acting at the interim CEO of EVCOM. I also sit on the campaign board of a national cancer charity `Maggies’ which I find extremely rewarding. It is absolutely fascinating to gain insight into a variety of organisations after so long working with one.

So who knows what comes next…..   I have no doubt that as we emerge from lockdown, much will change in our sector and I look forward to playing my part in shaping that new world. We have been through tough times before as an industry and those who reinvent, rethink and grasp the new opportunities are the companies that not only survive for prosper. I’ve secretly always loved the cheesy quote – `It is not about waiting for the storm to pass but learning to dance in the rain’.     Quite apt at the moment I think…. and those who know me well, know that I do like a bit of dancing…..