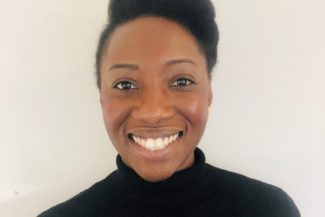 Fay Sharpe, founder of Fast Forward 15 introduces Felicia Asiedu in her series on Shero’s: “I’ve  known Felicia for a few  years now. She’s one of those women who quietly makes things happen, full of passion and compassion for what she believes in and a woman who sets the standard in and out of work. If you want someone to make things happen look no further.

Who is Felicia Asiedu?

“I am Felicia Asiedu and I’m the senior marketing manager for event marketing and management solutions at Cvent Europe. I have been in sales and marketing roles for just over 15 years primarily in tech companies. In all honesty this is not the way I expected my life to go. As a young person I was heavily involved in music through one of my brothers, who is a singer that was signed to Island records in his early 20s. I was convinced that I too would work within the music industry.

However, at an early age I was very driven to achieve the best in anything I was doing. Having had a childhood that was a bit scattered, I felt the need to do things in my life that would enable me to take control of my situations rather than allowing the situations to control me. This is how I live my life, and this is how I have shaped my career.

I am the 21-year-old that refused to be at the whim of a landlord so saved up to buy my own house. I am the 24-year-old who loves reaching out to people in my church community so became the outreach and events coordinator. I am the singer who loves to praise God so became the worship leader at church. I am the mum who couldn’t just let her kids go to school so became the chair of governors. I am the wife that wanted a new car but didn’t want to waste money so alongside her husband incorporated a property business to generate more income so the car wouldn’t be a financial burden. I am the black woman who wants to be part of the change that tells people we matter so I proudly became one of the FF15 Diversity Ambassadors.

Some say control freak; I say control what I know I can or at least try. So many things I know are outside of my jurisdiction. I can’t say what tomorrow will hold but I know I’ll be first to queue up to help shape it and to encourage others they can do the same. I tried and failed once to help one of my other brothers to see that life was for the taking. But he could not see it and instead took his own life. A hard pill to swallow but some things are beyond us all.

I want people to feel the power they have in their hands and I encourage people every day whether it’s my team, my friends, young people in my church or my community to grab the power they have and to carve out their careers, their choices, their daily decisions as they see fit. To not be limited by what people tell you can’t be, but to be inspired by what you KNOW you can be.”