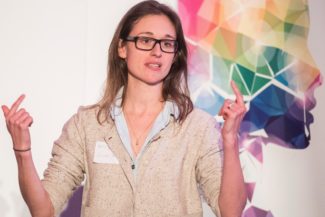 Fay Sharpe (founder of Fast Forward 15) introduces Abi Wright: “It feels like I’ve known Abi for years when actually I only met her a couple of years ago. She’s that kind of person, someone who lights up a room with her positivity, I’ve been blessed to have her join our FF15 training sessions and would recommend her for any virtual event that wants a unique wellbeing angle. Most importantly she founded Festival of the Girl, an inspirational event I’m looking forward to be part of again this year.

Looking for inspiration?  read on….

Abi: “It started like any ordinary Tuesday at just another networking lunch.  Little did I know I would meet Dawn-Louise who, after learning about the work I do, would introduce me to Fay Sharpe.  From the moment I met Fay I was inspired by her energy and enthusiasm and knew she was someone I wanted to work with.  I have since enjoyed running trainings on her amazing Fast Forward 15 programme, attended some of her fabulous charity fashion events, and last year we were hugely excited to invite her to run a workshop at our inaugural Festival of The Girl event.

“I’m Abi Wright and, like many of us, I’m passionate about creating a gender equal society for our children and I believe posture is key to this.

Having struggled, as too many females do, with lack of confidence, need for approval and a fear of failure I’m only too aware how this has held me back in my life.  It took me 35 years, endless trainings and qualifications, and having my first daughter to say, ‘enough is enough!’

Although my career has taken me from acting on stage in New York to working for organisations like Manchester United Football Club my love has always been yoga and the Alexander Technique. It was these practices that helped me to slowly re-build my confidence and self-esteem, that helped me to feel at home in my body and gave me the tools to stand tall and own my space.

Through these practices and working with my body I became aware of how growing up in our society had affected how I held myself.  It became glaringly obvious to me that as a female I was physically shrinking and constantly apologising for taking up space in a world that is built largely for and by men.  As soon as I had my first daughter, I knew I had to take a stand.  With 20 years’ experience in Alexander Technique, yoga and coaching, I created a movement founded on girls and women never having to apologise for taking up space. I created She Stands.”

“With She Stands, and the posture trainings I design, I want to help create a society where women and girls feel at home in their bodies, where all females are fully seen and heard and where we all feel able to stand up for ourselves and others. I truly believe posture can change your life, but I also believe it can change our society. And this change must happen so we can ensure that our girls are growing up realising their full potential and not being held back due to our patriarchal society and gender stereotyping.

It was having my daughters (Margot who is 3 and Nancy who is 7 months) that made me realise just how much we are suffocated by gender stereotyping. And this gender stereotyping is already fixed by the time children are 4 years old.

I wanted to do more for girls. I knew I had to do more. This led to me co-founding Festival of The Girl and putting on our first event last year.”

Festival of The Girl

“When we were creating Festival of The Girl it quickly became obvious that although there are some great initiatives out there for teenagers and young women at secondary school there is very little for primary school girls. The 7-11 age range is such a pivotal stage of development for girls and one that is increasingly influenced by societal and peer pressures. We realised it was these girls we needed to be engaging and inspiring.

Creating this initiative has been my proudest accomplishment to date, except for having my girls of course.  We are in the process of putting together our second, now virtual, event and the more people I speak to about what we’re doing the more I realise how urgently it is needed.  We cannot allow our girls to keep growing up in a world where their brothers have so many more opportunities than they do, where they are judged on how they look and not who they are,  where they don’t feel seen and heard, where they don’t feel safe.

Although at times I struggle to find the right balance between family life and work (and the constant juggle can be exhausting!) it is my girls that inspire me to keep going.  As women we have the strength and inner power to make a difference and create change. Together we can!”